On Sunday, the Arizona Diamondbacks will try to prevent a sweep of the three-game series against the Philadelphia Phillies. But, first, look at the sportsbook lines for the Diamondbacks vs. Phillies game.

The Diamondbacks were scoreless on Saturday, wrapping up a ten-game road trip. Also, they lost the first game, 7-5. At present, they are 3-6 for the current road trip.

On the other hand, the Phillies won nine games in a row. It included six games at home.

Sportsbook Lines for Arizona vs. Philadelphia 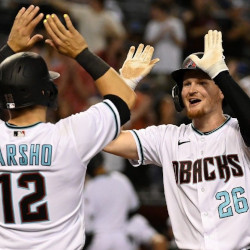 According to pay per head sportsbook reports, two left-handers will face each other on Sunday. The Diamondbacks will have Kyle Nelson as their starting pitcher. Also, it will be his first time to start for Arizona and his 20th appearance on the mound this year. Nelson has 2 BB, 19 K, and 1.02 WHIP in 17 2/3 innings.

On the downside, Nelson pitched more than one inning four times this year. However, he only allowed runs in three out of nineteen appearances this year.

According to sportsbook software experts, Philadelphia will have Ranger Suarez as the starting pitcher. It will be his 12th start this season. Also, he has 3.6 BB, 7.7 K, and 1.47 WHIP in 55 innings. In his last four starts, the team lost three games. However, he played seven innings and allowed two runs in his previous start.

For the Money Line, we take the Diamondbacks at +180. Although they are currently 0-2 in the series, they have only been swept once away from home this season.